The journey began in 1998 as Nimbus Holdings, which imported confectionary products from India and distributed all over Nepal’s retail and wholesale market. With time, it gradually shifted to import with the distribution of soya cakes and maize. This move towards the agribusiness sector eventually led the company towards animal health and nutrition.

During that period, there was limited skilled manpower; not many possessed the required knowledge of animal nutrition and health. Therefore, the company imported animal vitamins, vaccines, and medicines from the US and France-based MNCs such as Elanco(USA), Adisseo (France), Alltech (USA,) Merial (France).

The experience and association with international companies paved the way for the company to garner extensive knowledge of animal health and nutrition. Soon Nimbus initiated its own plant that produced animal feed supplements.

In 2004, Probiotech Industries, the first pellet feed manufacturing unit in Nepal was established. This was a turning point for Nimbus. The company’s animal feed brand ‘Shakti’ gradually started to take over the country’s market. Soon it became the largest selling animal feed brand in Nepal with tremendous market share.
Eventually, the company started making its footprint into the FMCG/Grocery space. Probiotech began manufacturing products such as edible oil, flour, lentils, nuggets, and pickles under the brands Byanjan and Sunaulo Kiran; both the brands are flourishing and booming their position in the FMGC market.

Today, NIMBUS is known as a manufacturing and trading enterprise, with focus on agri-processing and allied processed products. Collectively, we are approximately a NRs. 12 Billion (2017/18) business with more than 800 employees, a sales team of 80. In addition, NIMBUS owns 9 depots & warehouses in prominent locations, with 310 dealers, and 500 sub-dealers across the country. The current capacity delivers FMCG products to 23,400 outlets throughout Nepal, with a target of 40,000 outlets by the year 2020. We also reach out to 40,000+ farmers in over 70 districts of Nepal. Our employee base comprises of experts from the related industries, including veterinarians, JTAs, Engineers, MBA graduates, Chartered Accountants, Agricultural and Financial consultants. We work or have worked with companies like Suguna, Godrej, Shanthi Fortune, Ranbaxy (VENTEX-Pfizer) in India, some of the large ones in our sector, which has sharpened our business acumen, insight, appetite and also skills.

Over the years, NIMBUS has been able to provide a leadership in the agri business sector of Nepal. We have always believed in providing the best quality products to our valued customers at reasonable prices. We always believed in innovation of products and technology so that we can create benefits to our customers and farmers. For its efforts, NIMBUS has been recognized with the ‘NS Quality Award’ for its quality production. Similarly, we have received many appreciation certificates from different organizations too. NIMBUS understands that the various awards and recognitions that we received are because of our top priority for quality. We have never compromised in the quality of products with regards to machinery, raw material, personnel and our final product.
Though we as the NIMBUS have never worked with the hope to receive any award as such, nevertheless these awards are very important for the organization to keep focusing on quality production. It plays a vital role for the business sector in all aspects. This is an indicator of our performance and growth.

Nimbus is committed to behave ethically and contribute to economic development while improving the quality of life of the workforce and their families as well as that of the local community and society at large.

Nimbus Mission The Company’s mission is to provide quality, innovative, cost effective products, and services to the market through a commitment to excellence, a dedicated workforce and the adaptation of leading technologies.

We envision ourselves to be a prominent diversified business through higher quality of product, higher standard of service, creating values for the Nepalese economy and the Company’s stakeholder.

Cultivating seeds of success Nimbus was born when the Nepali society was undergoing a transition, people limited their dreams due to the political, social, and economic factors. The company, on the other hand, aimed to convert dreams into reality. Through the introduction of an enterprise that prioritised quality over profit, the company aspired to lead the country towards economic prosperity. The risk-taking nature and the accomplishments of the business truly showcased, “the season failure is the best time for sowing seeds of success.” Nimbus started as a trading enterprise then ventured into the poultry industry within a few years of its establishment. Later, it took a leap into the production and marketing of consumer goods such as food grains, nuggets, and edible oil. Over the years, we have created a product basket targeting multiple markets, insulating ourselves from an excessive dependence from only one segment. We have established ourselves as a leading agri-business company in Nepal. Our brand Shakti enjoys a tremendous market share in the country whereas, our FMCG products have garnered equal respect. Our brands Sunaulo and Byanjan have trusted product names when it comes to the production of daily staples such as edible oil, rice, lentils, and soya nuggets. Furthermore, we are proud to present Himalayan Happy Pet, the very first formulated food for dogs and other associated canines. Our success is not favored by luck, but we credit it to our team of experts who have strengthened our manufacturing processes continuously. We plan better. We delve deeper. We work harder. In short, we strive to achieve better. Ending my note with great optimism. The company continues to accomplish more and in doing so, intends to enhance the value for all its stakeholders in a sustainable way. 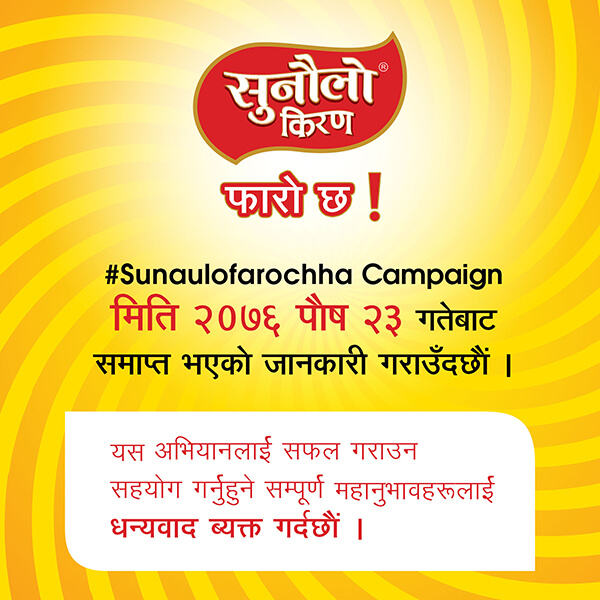